My second post when I started this blog was about my choice of a prototyping board to explore, and I started out with an Arduino. Back then, one of my arguments for choosing the Arduino over the Raspberry Pi was cost. While the cost factor hasn’t changed all that much, I managed to get myself gifted a Raspberry Pi 3 (and that’s how you bypass the cost factor lol).

So for the past couple of years I have been mildly exploring the Raspberry Pi 3 (emphasis on mildly), and what I’d like to go through is: “WHAT THE HELL DO YOU DO ONCE YOU GET A RASPBERRY PI?”

Thing is, the Raspberry Pi isn’t a straight forward device. It isn’t as plug-and-play as the Arduino, and if you just buy the thing itself and bring it home without any prior planning, you will be terribly disappointed!

There are many ways to setup the Raspberry Pi 3, but I want to go through what I call the least stressful way of going about it, which is the one that requires the most amount of equipment.

When you buy a Raspberry Pi 3, all that comes in the box is just the Raspberry Pi 3, with absolutely nothing else. Not even a freebie micro USB cable. Absolutely nothing else. So there are a couple of things that you either should be having around if you are tech savvy enough, or if not, better think about buying them or at least having access to them for the initial setup.

So the recommended items for an easy start are as follows:

The most important thing in the list above that you absolutely MUST get is a microSD card, along with an SD card adapter for microSD for formatting purposes. It is on the microSD that an OS will be installed for the Pi to be functional. If you are buying a brand new microSD Card, you really want to buy a Class 10 microSD Card, and though the recommended minimum storage space is 8GB, I’d say go with at least 16GB. You can read more about SD cards here on the Raspberry foundation’s official page.
Once you have yourself a microSD card via whatever means, the next thing is to format it, then load up an OS onto it. Yes, even if it is brand new, it is best to format it.

For formatting purposes, it is recommended to use the SD Card Formatter. I can’t really explain why but that’s the rule of thumb. Apparently it’s the best way to format SD Cards. So plug your microSD card into your PC with the help of the SD adapter and let the formatting begin.

Once you have your freshly formatted SD Card, you are now ready to load it up with an OS. The easiest way to do this is to go to the Raspberry Foundation’s website and download NOOBS which was designed specifically for newbies (noobs). Nah, I kid, NOOBS stands for New Out Of the Box Software.

The good thing about NOOBS is that it will do the heavy lifting of installing an OS for you. When downloading NOOBS pay careful attention to the version you are downloading. One version is for “Network Install Only” meaning you will definitely have to have an active internet connection while installing it, but if you want to do an offline install because, you know, you aren’t one of the lucky few people with WiFi at home, you’ve got to choose the “Offline and Network Install Option”.

Once you have downloaded NOOBS to your PC, extract the files from the zipped folder and copy them to your microSD Card. If you extract to a folder, don’t copy the folder to the card, copy the contents of the folder to the microSD card. After all this trouble, you are finally ready to actually start handling the Raspberry Pi.

Plug your microSD Card securely into the Raspberry Pi’s microSD Card slot. Then connect your Keyboard, Mouse, HDMI cable to your Raspberry Pi. Once all these peripherals are connected, power up your Pi with the micro USB cable. If everything goes according to plan, NOOBS should load and you should see the options to install OSes. 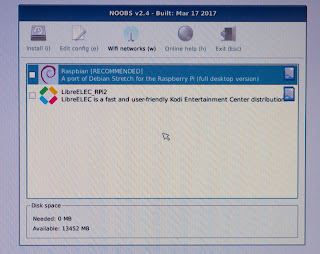 If you chose the “Offline and Network Install Option” of NOOBS, then you should be able to install either Raspbian the recommended OS by the Raspberry guys, or LibreELEC which can be used to setup an entertainment centre. If you want to have multiple OSes on the same microSD Card, NOW is the time to install them. If you install one OS and later decide that you want to have the option to boot multiple OSes, you will have to start from scratch and lose whatever data you had.

If you have an internet connection at hand, you could connect the Pi to it (either WiFi or Ethernet works fine) and you will get options for other OSes you can download for installation purposes. 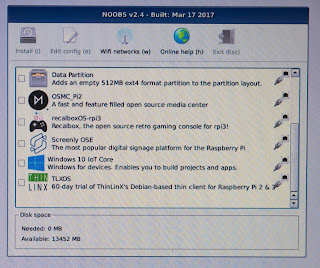 I chose to install both Raspbian and LibreELEC just for the sake of having options and it took about 50 minutes to install, so you may want to make yourself a cup of coffee as you wait out the installation process.

Once the installation is done you’ll get a confirmation message that the process was a success and then asked which OS you’d like to boot.

If you boot into Raspbian and everything’s okay you should be greeted by a lovely desktop.

And now you are ready to start exploring the amazing world of Raspberry Pi. You can play some of the sample games they have on there (which is what I did for the first couple of months), I recommend Worm, which is a version of snake.

One last thing I’d recommend if you are going to use the Pi’s GPIO pins, get yourself a bunch of Male to Female jumper cables, they will make your life super easy.

Hope this helps in some way. In a future post, I think I will go through how to setup a Pi with just a computer, you know, kind of like an in the wild installation.